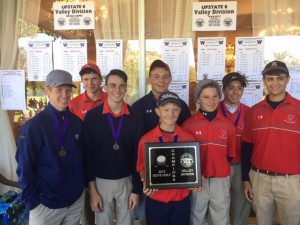 On Wednesday September 30, the boys golf team left St. Andrews Golf Club with some new hardware for the West Aurora trophy case. They had won the Upstate Eight Conference championship for the Valley division by beating second place West Chicago by two strokes with a final score of 334.  This was the Blackhawks first conference golf title since 2007. 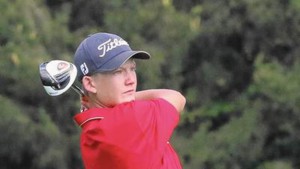 Freshman Ryan Vanderway finished the day with a score of 78. This earned him medalist and Valley Player of the Year honors. Coach Jay Bauer must have had a good feeling about Ryan joining the team, since Ryan tied for first in the A flight for the Aurora City Tournament this past summer (at the age of 14).

Senior Dean Lavery carded an 84, which earned him a 6th place finish and All-Conference honors as well. In addition, Myles Whiting finished 10th with an 85, while Sam Lawless shot 87 to come in 12th.
Congratulations Blackhawks and good luck with the Oswego Regional meet on October 6 at Blackberry Oaks in Bristol!

Blackhawk Sports Boosters Be A Part Of It!

Since 1970, the Blackhawk Sports Boosters have helped build one of the finest high school athletic programs in Illinois. Be a part of it today.